Your Grocery Store Is Ripping You Off 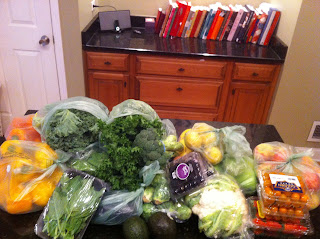 I had a wise African-American colleague named Wendell.  He said to me, "You know whitey getting ready to move into a neighborhood when they get their Starbuck's and an expensive grocery store.  Why do [white people] spend so much money on food?"  Good question.

I'll admit it.  I spend way too much money on food.  Now, it should be mentioned at this point that American's, by far, spend a much smaller percentage on their food than any other country in the world.  This is primarily due to industrialized agriculture and government subsidies of specific crop products.  Christian Lander's actually said that Whole Foods is like church for white people.  It's where you will definitely find a whole bunch of Caucasians on Sunday, after they've had brunch at a local cafe that serves local, artisanal, sustainable, organic cuisine and fair-trade coffee.  Brunch of course being the greatest excuse ever for day drinking.  If that doesn't make you happy enough, the grocery store I go to actually has two bars in it.  Two! One for wine and one for beer.  Happy shopping!

This is where we've been deceived.  Prior to World War II, grocery stores were not omnipresent.  Generally shopping involved going to the butcher, the dry goods, and the green grocer at the very least.  It was tedious to stop at several venues.  The supermarket changed all of that.  Now, everything is in one location with a huge parking lot and gas was cheap.  Fast forward to modern day and the standard grocery store also has a pharmacy in it too.  Now you can get sick eating the standard American diet and get your drugs to counteract the effects in the same place.  Sweeeeeeeeeeeeeet.  But here's the problem, now that all of the products have been put under one roof, the prices of all these products are factored in together to maintain profit for one merchant.  That means that the grocer can create "loss leaders" to generate traffic.  That is he might put ribeye steaks on sale, so cheap in fact that the store might only be breaking even or losing money on the meat. (Which, ironically, is already artificially cheapened by government subsidies of corn crops.) However, strolling through the produce aisle lemons are $1 each and a tiny bunch of basil is $2.99.  No wonder the standard American is fat.  The grocer doesn't care that he maintains little to no profit on steak, he's taking you to the bank to on fresh fruits and vegetables.  America is the only industrialized country where food has an inverse relationship to price.  That is, the higher the concentration of calories in a product, the cheaper it generally is if you examine it as a calorie/cost ratio.  (Again, directly related to agricultural subsidies.)

Enough of that, I actually am typing this to share with you my produce haul this morning.  Yes, I go to Whole Foods, but I don't buy my produce there.  It's way too expensive.  Instead, I journey to the magical land of Stanley's, an honest to god produce store that's so cool it doesn't even have a website.  Now, this isn't a normal haul.  I'm on a juicing and vegan cleanse this week so it's a bit abnormal for me to buy this much stuff.  And on another point, I never go with a shopping list.  I go and only buy what's on sale.  That generally means no expensive asparagus or brussel sprouts for me when they're out of season.  Stanley's has them but I don't buy them until they're dirt cheap.  This is another great way to save money.  Don't use a shopping list. Just buy what's on sale and build your meals around that.  (Granted, you have to be a pretty good cook to pull that off.  Which thankfully, I am.) Even better is now that it's winter, you can really stock up on a lot of hard winter vegetables that don't require refrigeration and just stock 'em up in your cupboards-squash, parsnips, turnips, sweet potatoes-you get the idea.

A huge amount of this is going to be juiced but let's take some time to examine a few of the items that a bought a bunch of.  I got 7.5 lbs. of Honeycrisp because they were down to $1.79 lb.  That's awesome.  Honeycrisp are generally about $3/lb.  And apples keep well, think about it, growers and distributors store them and sell them to you next spring but charge a boatload.  Eat them while they're fresh and cheap.  All the squash, potatoes, onions, etc. are going to stay good for weeks.  And why did I buy 8 lbs. of peppers?  Because they were .20/lb.  They're going to be roasted and packed in olive oil.  Next time you're at the deli or in the Italian section and you're paying $5 for a tiny jar of roasted peppers, remember this.  A couple months ago I bought an entire CASE of strawberries for $1 that were just on the verge of going bad and I made 10 pints of awesome strawberry jam.  How much does jam normally cost by the jar? And it doesn't taste nearly as good as homemade, not even close.

See that picture at the top of this post?  That's how much produce I hauled in for $61.  If you consider that that's what my wife and I will eat all week, that's pretty cheap. The moral of the story is, search out your community for your local produce store.  If you can't find one, I challenge you to journey to the Latin or Asian grocery stores where you're going to find similar prices, albeit a more limited selection.  Don't fall for the standard trap.  Beat the system and stop being fleeced by your grocer for eating more vegetables and fruit.  To your health.  Cheers.